How Not to Die, by Dr. Michael Greger – a Review 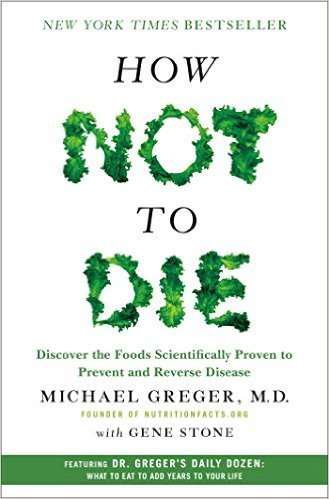 “How Not to Die” is certainly a provocative title.

On the one hand, a title like this could be considered the equivalent of literary clickbait. On the other hand, it makes a great eye-catcher and it certainly worked to grab my attention. In How Not to Die, Dr. Michael Greger MD discusses the state of current research on fifteen top causes of premature death in the U.S. and explains how changes in diet and lifestyle, namely eliminating animal products from your diet, can be more effective than medications and supplements for the prevention and reversal of disease. Does he succeed in making his case? Read on to find out.

This is a big honking book. It’s roughly 560 pages in length, with 134 pages dedicated entirely to an appendix documenting every referenced study, meta-study, or information source. Frankly, I’m impressed with the extent of the footnotes, I’ve never seen a diet or lifestyle book with such extensive references.

The book is divided into two main parts – the first is the more clinical portion that covers what science currently has to say about diet’s role in disease causation and prevention. The second part is the more practical portion that focuses on strategies for adopting the recommended diet and lifestyle.

Part one of the book is divided into 15 chapters, which each chapter following the same template:

Chapter N – How Not to Die From <Cause of Death>

Where <Cause of Death> represents the fifteen largest modern medical killers in the U.S., including organ diseases (heart, lung, brain, liver, kidney), various cancers (breast, prostate, colon, blood), high blood pressure, diabetes, suicidal depression, Parkinson’s, and infections. The last one is “Iatrogenic” causes, which is a fancy term meaning “deaths caused  by medical examination or treatment.” This last chapter is especially interesting – I didn’t know this, but if you add up all the deaths that can be directly attributed to medical errors or negligence, iatrogenic death becomes the third leading killer of Americans! 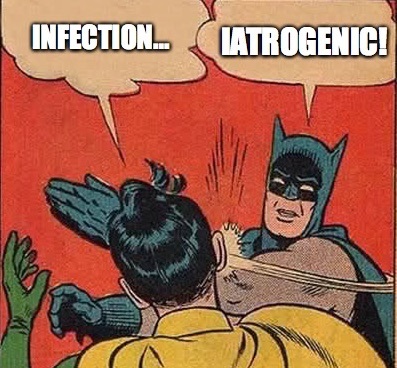 Each chapter focuses on one of these major killers and Dr. Greger attempts to provide an overview of all the available diet-related research for that topic.

Part two is dedicated to Dr. Greger’s “Daily Dozen”, which are the twelve things he recommends consuming on a daily basis. Unsurprisingly, this section is broken into twelve chapters. Want to guess what each chapter covers?

If you’re looking for another diet planning book, this ain’t it. There is no specific meal guidance provided and no recipes to follow. How Not to Die is strictly an attempt to present the current state of nutritional science as Dr. Greger reads it and make a case for a diet based on whole grains, fruits, vegetables, and legumes, and free of animal-based products such as meat, dairy, fish, poultry, and eggs.

I say “as Dr. Greger reads it” because like many things in our country today, food has become politicized. Food production is big business, and there’s a lot of money to be made or lost on influencing the eating habits of 320+ million people. Scientific data is often massaged, cherry-picked, or completely fabricated to support a predefined narrative. It’s really hard to know who to trust, especially regarding diet because there is so much conflicting information thrown at us on a regular basis.

Is Dr. Greger unbiased? I can’t know with absolute certainty, but I do give him props for going to great pains to point out the inherent contradiction in modern medicine – our medical establishment is geared toward pushing drugs and procedures that treat symptoms of disease rather than promoting diet and lifestyle changes that address causes of disease.

Why is this? I believe the profit motive is well established, but just in case it isn’t I’ll spell it out. There’s shedloads of money to be made by pushing expensive pharmaceuticals and surgical procedures on consumers, and very little money to be made by pimping broccoli. To put it another way, healthy consumers make lousy cash cows. 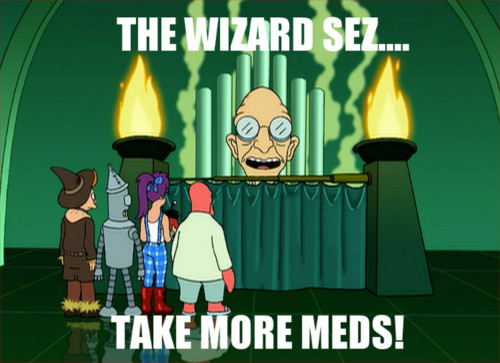 Pay no attention to the pharma rep behind the curtain!

Dr. Greger runs the extremely popular non-profit website NutritionFacts.org, which serves as a valuable free resource for nutritional information. The site offers nothing for sale, and as far as I can tell is run completely on donations. I picked up the book because I refer to NutritionFacts.org on occasion and I’m willing to give Dr. Greger the benefit of the doubt. I like that he’s not trying to sell me on a branded diet or fitness program  (The Greger Twelve-Step Ultrabro Fat Blaster Plan, in four easy payments of $29.95), I’m always leery of those sorts of thinly veiled attempts to cash in.

For each of the major killers mentioned in the layout section, Dr. Greger goes through the science and attempts to weave as much data as possible into a coherent narrative that includes personal anecdotes, patient stories, and humor, with varying amounts of success.

The second section is more practical, and while it doesn’t provide any meal planning guidance or recipes, Dr. Greger does go into great detail on why he recommends each of the items in his daily dozen list and gives solid advice on how to incorporate them into your day.

Dr. Greger makes a very convincing case to give up animal products altogether, or at the very least consume them infrequently. I had no idea there was so much evidence linking the consumption of animal products to so many leading causes of death in the U.S. For iatrogenic causes, Dr. Greger makes the case that living healthier means less need for medical care, which means less risk of death by unintended consequences.

I’m sufficiently convinced to put the diet to the test and report back, I plan to eliminate animal products from my diet for one month and document the results for science.

Dr. Greger has a knack for making the research mostly accessible for a non-medical layman like myself, but he isn’t always successful. There are times where he uses just a bit too much jargon and it makes my eyes glaze over, much like the look I see on most people’s faces when I try to explain the work I do as a software engineer.

Another con, although I can’t fault the book for this – I love meat! I live in Texas, where barbecue is a way of life ranking just below God, country, and football. Butter is also a staple in my diet, and being asked to give it up makes me want to take up arms against the infidel.

However, I’m past the age where I should be thinking about my long term health, and I’m mature enough to prioritize my health over my taste buds. I don’t come from a line of long-lived stock, and my family has a history of heart disease, liver disease, brain disease, diabetes, cancer, and depression. I’ll be damned if I’m going to let one of these take me down without a fight, and I don’t want to be old and dependent on pharmaceuticals. Do you? 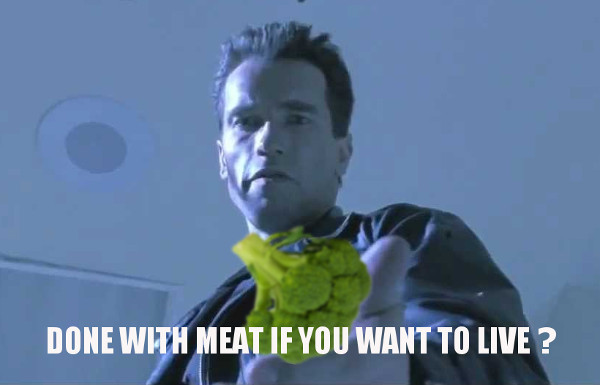 I learned a lot by reading this book, and I would recommend it to anyone wanting to look past the veil of pseudo-science,  propaganda, and marketing surrounding food to see what genuine research actually says about the effects of a standard American diet on long term health and wellness. At the very least, it will allow you to make more informed decisions about what you choose to eat.

If you just want the executive summary, here it is – Dr. Greger makes a convincing research-based case for greatly reducing or eliminating animal products from your diet.  Oh snap!

Easier said than done, especially here in the U.S. where food is so abundant that meat consumption is commonplace instead of a luxury, and fad diets like Paleo are all the rage. Yes, I called Paleo a fad diet, deal with it. I know it works for a lot of people and that’s cool, but I don’t think Paleo is special in this regard. Any diet that eliminates processed foods in favor of whole foods is going to deliver results. 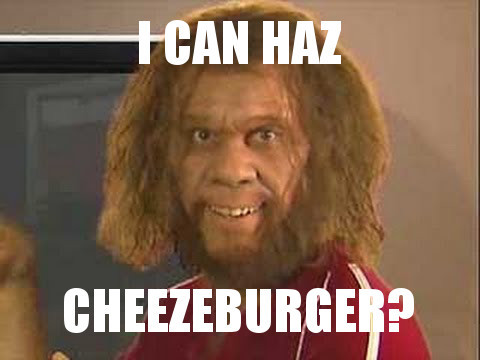 I should note that Dr. Greger is not advocating a vegan diet. Technically, a vegan could eat french fries and potato chips all day long and still be vegan, but with very little nutrition to show for it.

Instead, Dr. Greger advocates a whole foods plant-based diet consisting of whole grains, fruits, vegetables, beans, seeds, and nuts. In other words, eat foods as close to their natural state as possible, and avoid heavily processed foods altogether. This doesn’t mean the food can’t be cooked, only that unprocessed foods should be chosen over processed foods.

This is the Fitness Test Lab, so it’s not enough for me to review the book and leave it at that. There is a call to action inherent in the title, and I’m sufficiently persuaded to put this way of eating to the test in order to get some real world data.

My plan is to eliminate animal products from my diet for one month and document the results. I intend to weigh myself, take pictures, and get bloodwork done before and after the trial period. I’ll do my best to track progress during the month, and I’ll provide a follow up with results after the trial is complete. As it stands today, I intend to start at the end of October 2016 and finish up just before Thanksgiving. I’m willing to be a guinea pig, but I ain’t missing out on turkey day!

Update – the experiment is complete and the results are in!