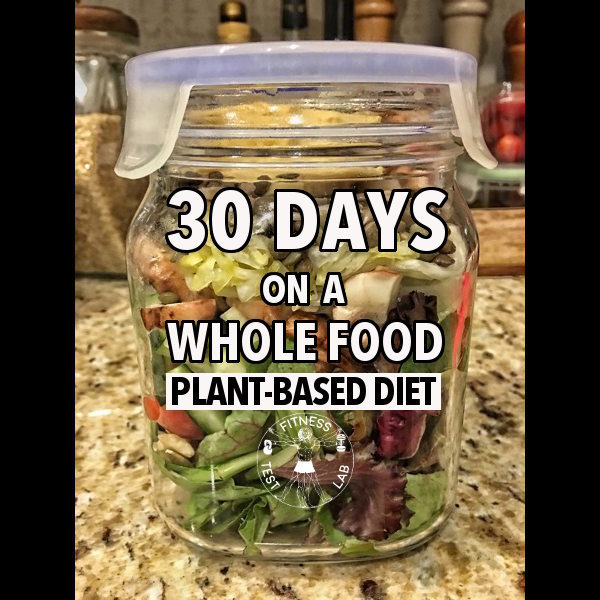 Not long ago I reviewed Dr Michael Greger’s book How Not to Die, and at the end of the review I said I was  sufficiently convinced to give up eating animal products for a month and document the results. The month came and went, and the results are in. Want to know how it went? Read on to find out. Spoiler – I successfully managed not to die!

In case you haven’t had a chance to read the book review, I’ll reiterate what I said I would do:

My plan is to eliminate animal products from my diet for one month and document the results. I intend to weigh myself, take pictures, and get bloodwork done before and after the trial period. I’ll do my best to track progress during the month, and I’ll provide a follow up with results after the trial is complete. As it stands today, I intend to start at the end of October 2016 and finish up just before Thanksgiving. I’m willing to be a guinea pig, but I ain’t missing out on turkey day!

I stopped eating animal products on October 27, and had a full physical with bloodwork done by my physician on the 28th. When the results of my physical and bloodwork came back, everything was normal except my cholesterol. My total cholesterol and HDL cholesterol were above the reference ranges. Not good! Thankfully, my HDL/LDL risk ratio was still well below the danger zone.

For the next 28 days, I refrained from eating any type of animal product with the exception of honey in my tea. In addition, I upped my intake of fruits, vegetables, nuts, legumes, and whole grains. I did not eat processed foods, but I don’t normally eat processed foods anyway. I didn’t track calories and I continued to consume alcohol at a moderate level. In other words, I made no other changes aside from what I’m outlining here.

I had my blood drawn again on November 23rd, just before Thanksgiving. This time I decided to limit the focus to a cholesterol test since bloodwork is expensive and everything else was normal before the experiment.

In addition, I took pictures of myself every week and I tracked my weight and fat percentage using my bathroom scale. For consistency, I took the weight measurements every morning right after waking up.

I’m going to assume you already know what cholesterol is and why having high cholesterol is undesirable, but in case you don’t here’s a handy explanation from the American Heart Association.

My family has a history of heart disease, so I consider this to be a big step in the right direction for me. I was very glad to see my LDL number go down.

I recorded my weight every day except for three days at the beginning of November where I was traveling for work. My weight fluctuated between 169-173lbs over the course of the month. Overall, my weight trended downward, expect for the occasional spike. I tracked what I ate and noted the spikes came on days after consuming meals heavy on salt. This leads me to believe the weight increases were due to water retention rather than anything having to do with the removal of animal products from my diet. 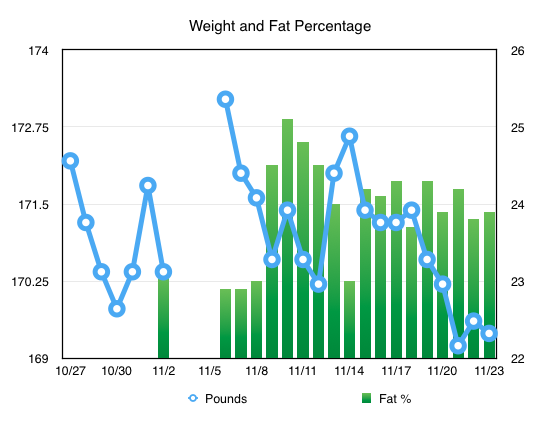 My bathroom scale measures body fat, so I started tracking this metric on November 2nd. Over the course of the experiment I came to the conclusion that the fat percentage calculator built into my scale is completely worthless. I did some research on how a scale measures body fat and learned it does this by running a very low voltage current through the lower body. Since the electrical current flows more quickly through water and muscle than bone or fat, the scale measures the speed of the current and applies a calculation to come up with a number. This means the numbers vary wildly depending on how much water the body is holding on to, and explains why my body fat percentages are lowest on days after a salty meal when my weight is highest. I’m presenting the data in the chart above because I measured it, but I don’t consider it to show anything meaningful.

Almost everyone over 40 can attest to having a few minor aches and pains that are part of daily life, and I’m no exception. My shoulders and hips ache occasionally, and prior to this experiment I just chalked it up to getting older. During my month of eating a whole foods plant-based diet, I was surprised to find I was completely free of aches and pains!

I know realize that the aches and pains I was experiencing were the result of inflammation, not age. The day after the experiment ended was Thanksgiving, and on that day I had eggs, sausage, butter, turkey, and cheese over the course of the day. The next morning, my aches were back in full force. After a month of being pain free, there is no doubt in my mind I had a reaction to one or more of the animal products I ate that day. I don’t yet know whether the inflammation is due to a specific animal protein, quantity of consumption, or both, but I intend to continue experimenting to find out. This is just too good of a benefit for me to pass up.

My digestion over the course of the 28 days was completely wrecked. I’m not surprised in retrospect, I dramatically upped my fiber intake when I eliminated meat in favor of fruits, vegetables, and beans, and my gut took a while to adapt. If you’re considering making a similar dietary change of your own, I suggest easing into it gradually rather than making a radical change from one day to the next like I did.

I had secret hopes of shedding enough pounds over the course of the month to finally reveal the 6-pack abs I know must be floating around in there somewhere, but alas, it was not meant to be. Although my weight is trending downward, I didn’t see a major difference in my appearance. This includes skin tone, hair, and nails. I’m not bothering to post before/after pictures, since there isn’t a significant before/after difference.

It’s really hard to eat a whole food plant-based diet when eating out.  Meal options at restaurants that fit into a whole foods plant based diet seem to be few and far between. On more than one occasion I had to order a dish with meat and just not eat the meat. 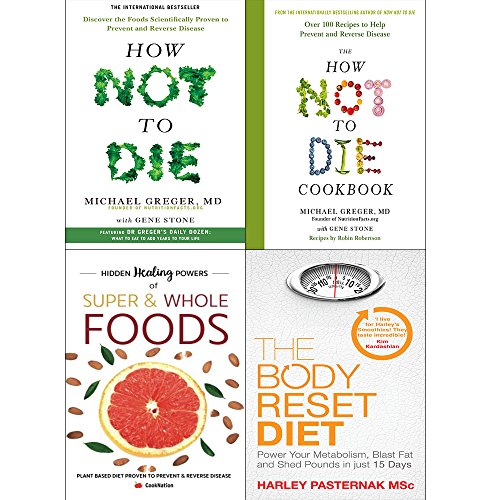 People looked at me funny when I told them I wasn’t eating animal products. Meat consumption is such an ingrained part of our culture that most of my social circle found it odd when I said I was eating a plant based diet. A common question I got was “where are you getting your protein?”, as if animals were the only viable source of protein available for human consumption. I know this is a common misconception that I previously shared, but the plain truth is there’s plenty of protein available in beans, kale, broccoli, and other sources to support recovery and muscle growth.

I was able to work out harder in those 28 days than I had in the previous year. I stepped up my workouts during the experiment by adding steel club work to my usual kettlebell work. The steel clubs add a whole new level of intensity, and I was pleased to see I had no problems with recovery. I’m not sure if it’s because I had more energy or if the lack of inflammation I noted above allowed me to work harder, but I suspect it’s a little bit of both. Either way, I was able to work out five days a week, resting on Saturdays and Sundays.

Following a whole foods plant based diet for a month was one of the more interesting experiments I’ve performed. The fact that my cholesterol had a significant drop lends credence to the claims laid out in How Not to Die, or at least the claims related to heart disease. The most immediate benefit I noted was the lack of pain due to inflammation, and this alone is enough for me to keep experimenting with this diet. The downward trend of my weight is also nice. I’ll probably continue to eat animal products, but after going through this experiment I plan to dramatically reduce the amount of meat, dairy, and eggs I consume in favor of nuts, beans, and leafy greens.

How to Break a Sugar Addiction