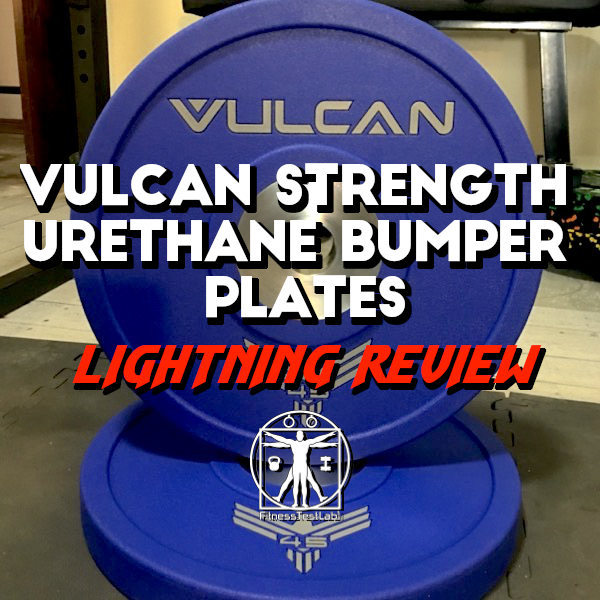 Urethane bumper plates are a great alternative to rubber plates, although urethane does incur a premium over plates made of rubber.

The Vulcan Strength Urethane Bumper Plates are one of the most budget friendly options I’ve been able to find for urethane bumper plates with weight denominated in pounds.

I recently had the opportunity to inspect a pair of these plates in the Lab and I’m ready to share my thoughts on them. 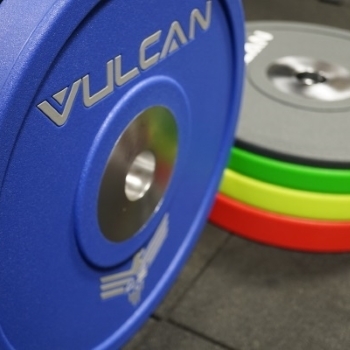 The team at Vulcan Strength Training Systems was kind enough to send me a sample pair of the 45lb Vulcan Prime Urethane Bumper Plates to inspect, with the requirement that I send the plates back to them in the same condition I received them.

Because of this requirement I was not able to fully put them to the test in the Lab, which is why this is a lightning review instead of a full review.

My comments will be limited to what I was able to visually inspect or physically measure. 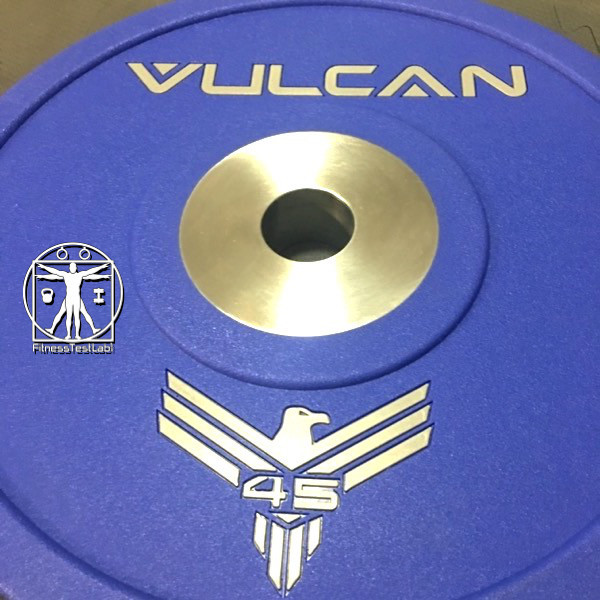 Vulcan Strength Urethane Bumper Plates are styled after ‘competition’ bumper plates, but made of urethane instead of rubber.

In case you’re not familiar with urethane, allow me to quote the relevant info from my Bumper Plate Buyer’s Guide:

Urethane is a synthetic compound that combines some of the best properties of plastic and rubber. Urethane is highly resistant to abrasion, cutting, and tearing while still maintaining enough flexibility to resist impact damage and deformation. In other words, you can beat the heck out of stuff made of urethane, which makes it an ideal material to make bumper plates out of.

So yeah, urethane bumper plates are extremely durable, and they have a few other advantages over regular rubber bumper plates that make them worth considering:

In my opinion the lack of a rubber smell is by far the best benefit to buying urethane plates.

My home gym is inside my house and doubles as my home office, so I spend a lot of time in this room. I’ve tested and reviewed many different brands of rubber bumper plates over the years, and all of them gave off a significant rubber odor, even the ones marketed as ‘low odor’.

Believe me, when you’re in an enclosed space with virgin rubber bumper plates for an extended period of time, even ‘low odor’ eventually translates into ‘smells like a tire shop in here’.  That’s just the nature of rubber.

On the other hand, urethane has no odor. If you or anyone in your household is sensitive to strong odors, then consider urethane plates. You’ll thank me later.

At the time I published this article the Vulcan Strength Urethane Bumper Plates are the most affordable option for urethane plates with weight denominated in pounds that I’ve been able to find.

If you’re more interested in urethane plates with weight denominated in kilograms, check out the Titan Fitness Urethane Bumper Plates (full review) instead.

The first thing that stands out about the Vulcan Strength Urethane Bumper Plates is the high level of quality.

They have the look and feel of a premium product.

Unlike other competition plates I’ve reviewed, the lettering and logo of the Vulcan plates are etched directly into the urethane and painted. 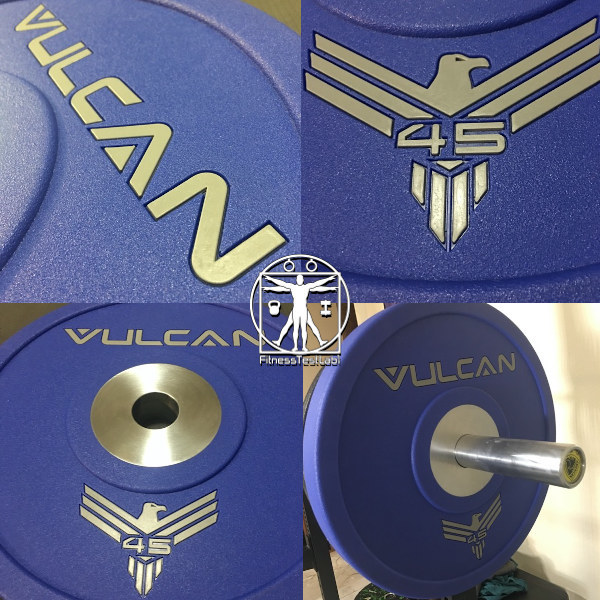 The coloring of the Vulcan Strength urethane plate is very vibrant, especially when compared to rubber competition bumper plates.

The shade of blue on the 45lb plate is much deeper than other urethane plates I’ve seen, looking almost purple when compared to the Titan Fitness 20kg urethane plate (full review).

Given how well urethane holds color, I’m guessing this is a deliberate choice by Vulcan Strength to differentiate their plates from other vendors. 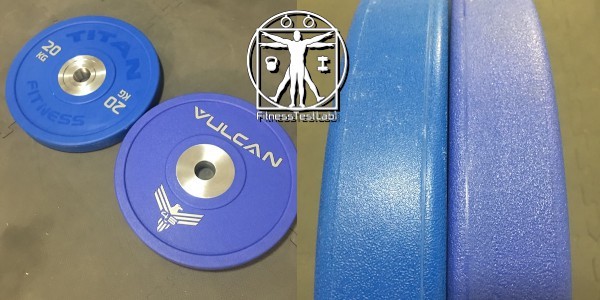 The metal insert is a single piece of hard chrome, which may or may not be a good thing depending on who you ask.

For example, the Rep Fitness Competition Plates (full review) have a three-piece design that uses a separate inner ring.

According to them, this design is better than a single-piece design for the following reasons:

Many competitor’s competition plates feature a single solid steel disc, and that design ends up failing at the point where the rubber and steel meet because all of the force is transferred there. Our extra inner steel ring, combined with a patented means of connecting to the rubber plate, results in better absorption and dispersal of force which means better durability. 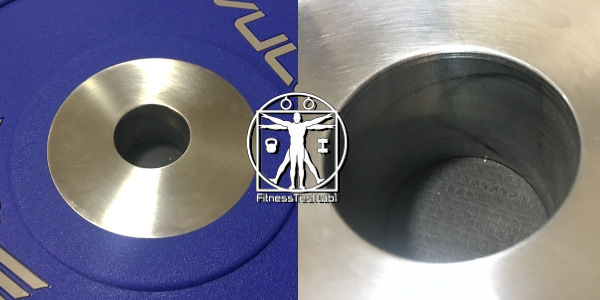 For what it’s worth, I don’t think most people working out at home will ever have to worry about this issue. It might be a different story for plates used in a more punishing environment like a CrossFit gym.

The center steel disc has an extra raised ring of rubber around it to protect it from metal-on-metal contact between plates.

I should also mention that unlike rubber plates, these plates have no oder whatsoever.

Vulcan Strength claims a weight tolerance of +/- 1% for these urethane plates, so I weighed them to verify the claim.

Both plates measured within the 1% tolerance range. 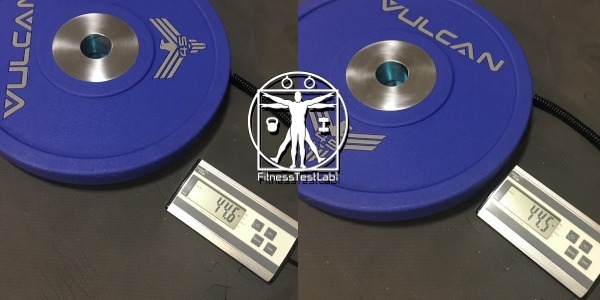 The Vulcan Strength Prime Urethane Plates appear to be a well made product.

Although I was not able to directly test their durability, I’ve had excellent experience with other equipment from Vulcan Strength Training Systems and I have no doubt these plates would make a fine and lasting addition to any home gym.

They are a great alternative to rubber bumper plates, especially if you are sensitive to strong odors since they have no odor whatsoever.

Urethane bumper plates are also more durable than rubber, so this single investment should last you for as long as you’re willing to lift them.

Got any questions I didn’t cover in the review? Put them in the comments and I’ll do my best to answer!