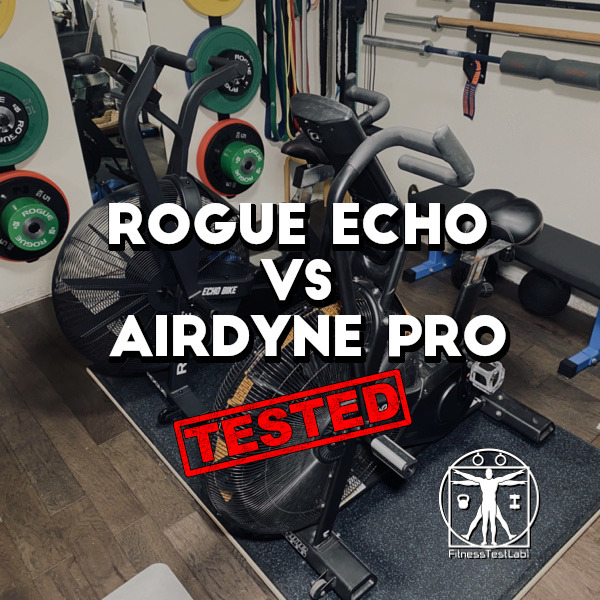 Air bikes have been around for decades, but they’ve gained a larger user base over the last several years due to the rise in popularity of CrossFit.

The Schwinn Airdyne Pro and the Rogue Fitness Echo Bike are two of the most popular models available. I own both, so I can speak to the pros and cons of each.

If you’re considering a purchase of one of these bikes, read on. 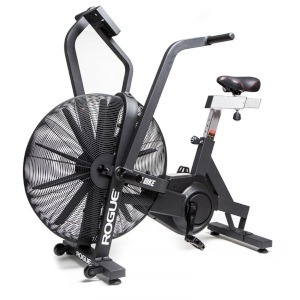 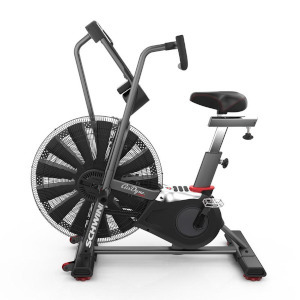 For what it’s worth, I’m aware that several others have already done comparisons of these two bikes.  While those people have generally done a very good job of comparing these two machines, I’ve noticed a few details that consistently get overlooked in those reviews.

For my part, I plan to focus mainly on things not already covered elsewhere to help you make an informed decision.

For the record, I own the Octane Fitness ‘AirdyneX’ version of the Airdyne Pro, which as far as I can tell from the product literature is basically an Airdnye Pro with an orange racing stripe on the fan.

What is an air bike?

Think of a bicycle with the front wheel replaced by a large fan. Then replace the regular bike handles with the handles from an elliptical machine. Connect the bike chain and elliptical handles to the front fan instead of a back wheel and BOOM! You have an air bike. 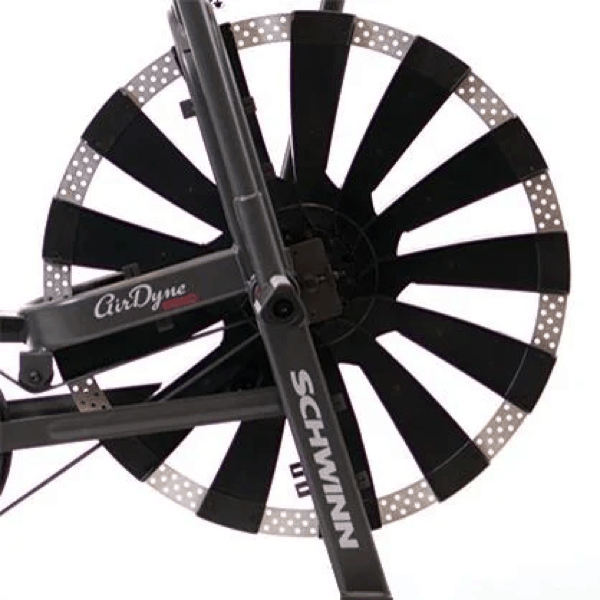 On a normal bicycle the hardest part of the cycling movement is getting started from a dead stop. Once you’re in motion, pedaling becomes easier.

With an air bike, it’s exactly the opposite. The faster you try and pedal, the harder it becomes to maintain that pace.

Why? As you work the pedals and handles on an air bike, the fan rotates and moves air just like a normal fan. The faster you pedal and push/pull the handles, the more air the fan has to move, so working the bike becomes more difficult.

To put it simply, an air bike is brutally efficient at punishing you for daring to use it and definitely worth having in your home gym if you have the space for one.

First off, both the Rogue Echo Bike and the Schwinn Airdyne Pro are extremely well made. I’ve never had any problems using either bike at max effort, although to be fair I’m not an overly large or heavy man. A more muscular man (or woman!) might have a different opinion.

However, my highly unscientific test of grabbing a handle and trying to shake the bikes from side to side results in a *little bit* of wobble from the Airdyne, whereas the Echo doesn’t move at all. It’s a rock. 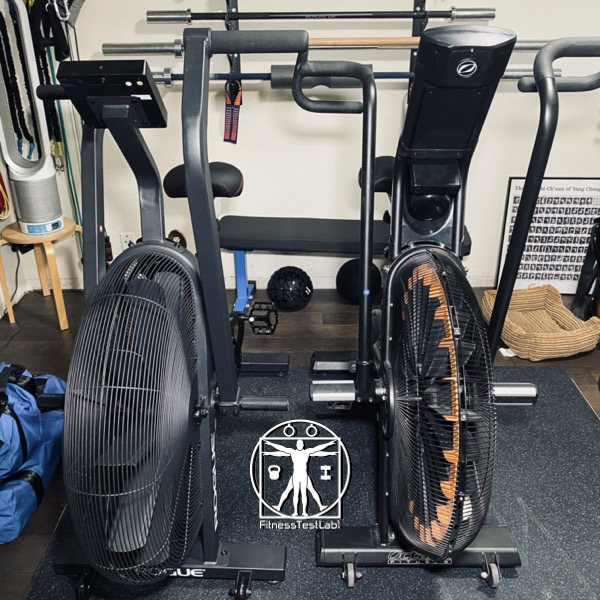 Rogue Echo utilizes a wider base and heavier gauge steel

Speaking of the Rogue Echo Bike, I’ve seen the term “overbuilt” used frequently without a clear explanation of what that means when compared to similar products like the Schwinn Airdyne.

From what I can see, a lot of that stability and “overbuilt”-ness comes from the choice of materials. The Rogue Echo Bike uses steel in many areas where the Schwinn Airdyne Pro uses plastic, such as the fan and the foot pedals. The Rogue Echo Bike also uses thicker gauge steel for the handles and frame, as well as wider base for the feet.

The Rogue Fitness Echo Bike and the Schwinn Airdyne Pro are both very good air bikes, and both do an extremely good job of sucking your life force out through the pedals and handles.

However, the Airdyne offers just a bit more versatility due to the fact that it’s possible to stand up on this bike while pedaling, which makes the movement similar to a climbing motion. 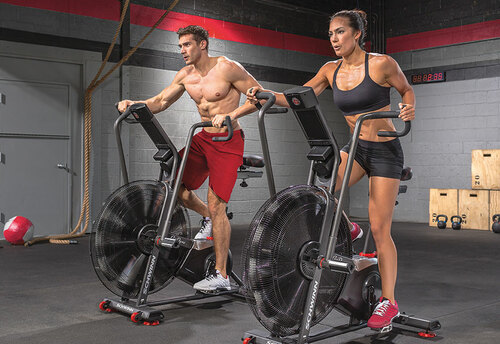 Standing on the Airdyne offers a motion similar to climbing

You can read my Versaclimber review for more details on the benefits of a climbing workout, and although it’s not 100% the same as a dedicated climbing machine, having the ability to stand up on the Airdyne offers some flexibility in how you use it. 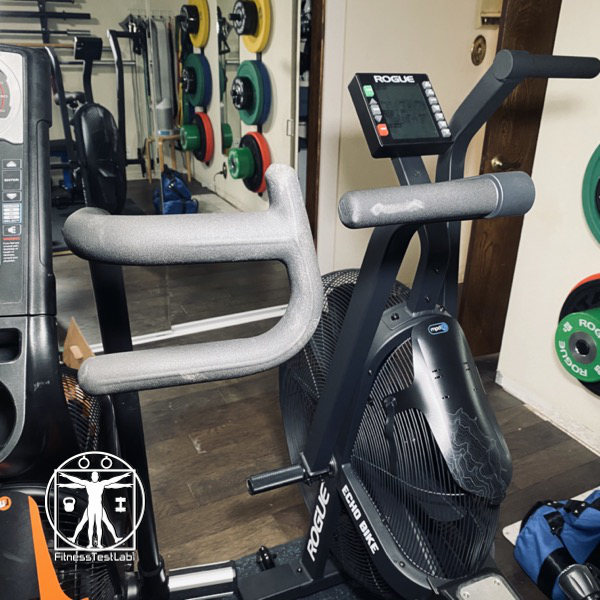 The Airdyne has multi-grip handles, the Echo… not so much

Another nice feature of the Airdyne is the multi-grip handles. There are three positions for your hands, which offers grip variety as well as providing some leeway for shorter people.

The Rogue Echo Bike handles are one-size-fits-all basic grips, and if that doesn’t work for you, tough tacos!

The user console on both bikes offer similar functionality but differ greatly in how they present that information to you. Each bike has options for preset and custom intervals, and each bike tracks the usual information like calories, distance, and power output.

However, the console on the Rogue Echo Bike is by far the easier one to take in at a glance.

Everything is clearly shown on one screen, laid out in a grid with your power output placed squarely in the center. 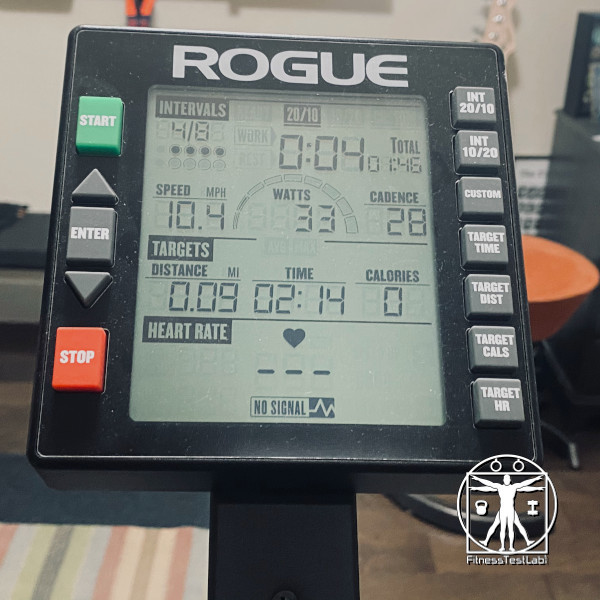 Rogue Echo Bike console, simple and easy to use

For reasons I don’t claim to understand, the console on the Schwinn Airdyne Pro splits the information between two screens – one small “tachometer” display and a larger main LCD screen.

The tachometer shows calories per minute, RPM, power output, and speed using bar graphs. The bar graphs don’t provide exact values, so it also incorporates an even smaller digital display that can be cycled through numerical values for each of these readings.

But really, who wants to mess with trying to cycle through the digital values while pedaling at full speed??

Not this guy, that’s for sure. 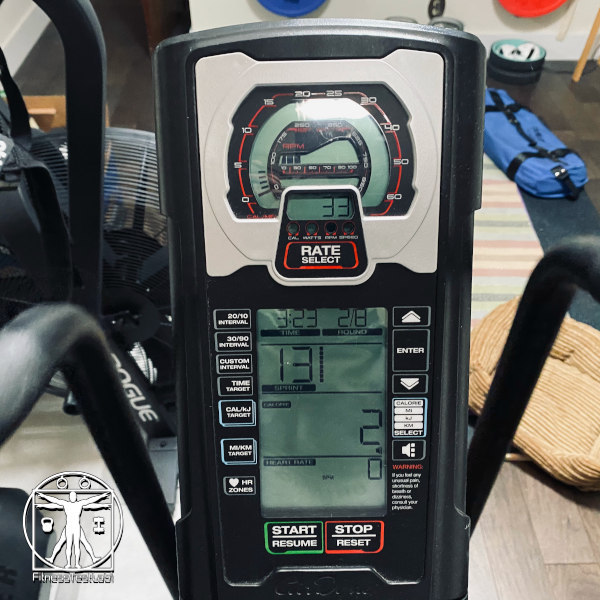 Schwinn Airdyne Pro console, I’m an engineer and I’m still confused by it

The top third of the main screen tracks interval rounds and time. The bottom two thirds are dedicated to calories, distance, and heart rate if you’re wearing a compatible heart rate monitor.

Frustratingly, the screen will display your total calories burned or distance traveled, but not both at the same time. There’s plenty of room to show both, but the screen space is just not well utilized.

Overall, I think the entire panel of the Schwinn Airdyne Pro needs a redesign. In comparison, the Rogue Echo Bike console is much more intuitive and easy to use.

Let’s get this out of the way up front – both of these bikes are loud. No getting around the fact that the fans are going to be noisy, especially when pedaling at high speed.

However, the Rogue Echo Bike is noticeably less noisy. I would say the Schwinn Airdyne Pro has a higher pitched whine, which I would guess is due to the difference in how the two fans are designed. 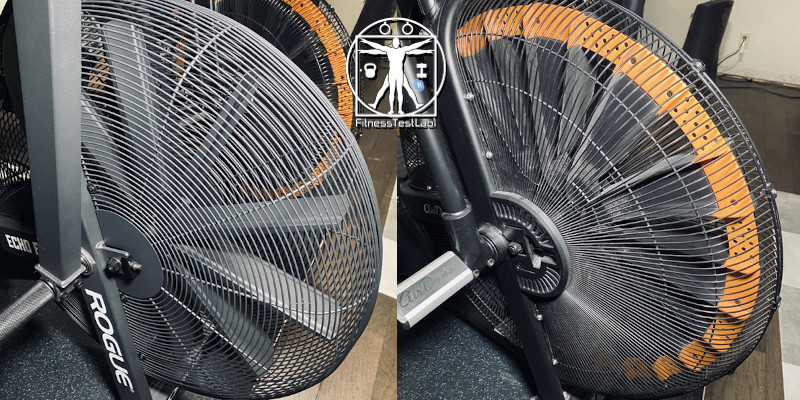 Between the two, I much prefer the sound of the Rogue Echo Bike over the Schwinn Airdyne.

Fan noise isn’t the only sound to be aware of. When using the bikes for interval training, both bikes will produce fairly loud ‘chirp’ tone to tell you when an interval round is about to end.

The volume of the Airdyne chirp is adjustable all the way down to zero, while the Rogue Echo chirp is one volume and cannot be turned off at all.

One annoying aspect of air bikes is the amount of wind they generate that blows directly into your face. I don’t care for this at all and I view a wind guard as a must-have attachment.

Unfortunately, neither bike comes standard with a wind guard. However, both companies are perfectly willing to sell you one at an added cost.

Personally, I think the official wind guards are overpriced for what they are. If you agree, there are alternatives.

I bought a couple of mountain bike “fat” fenders off Amazon and used those as wind guards. They work just fine, at half (or less) the price of the official versions ? 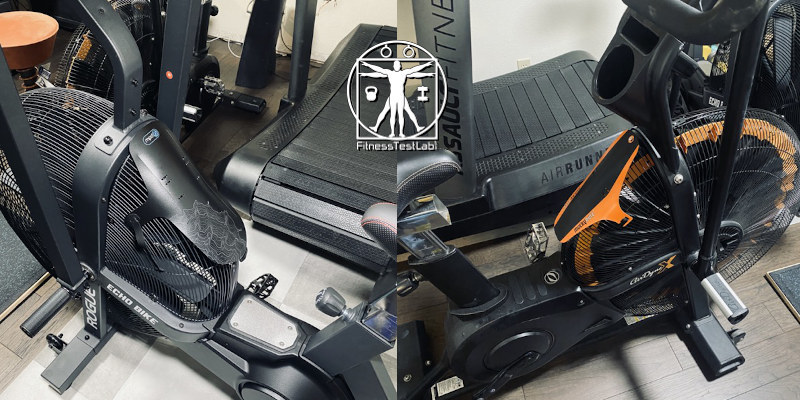 I have no need of a water bottle holder or phone holder on either of these bikes, so I’ve never used the ones on the Airdyne and I don’t miss them on the Echo. Your mileage may vary.

One other detail worth mentioning is the battery size used to power the consoles. The Rogue Echo Bike uses four ‘AA’ batteries while the Schwinn Airdyne Pro uses two ‘D’ batteries.

I think the use of ‘D’ batteries is strange for this type of machine. I have lots of uses for ‘AA’ batteries but no other device in my house uses ‘D’ batteries. So I have to buy a special pack just for the Airdyne ?

It’s a small nitpick, but still something worth knowing if you plan to buy one.

Like I mentioned previously, both bikes are very well made and they both will do the job an air bike is designed to do – totally wreck you for using one.

If I ruled the world I’d take features from both bikes and forge them into a single perfect air bike. But I don’t, so I can’t.

While the Airdyne does have some advantages over the Echo, I think the Rogue Echo Bike is a better overall value than the Schwinn Airdyne Pro. 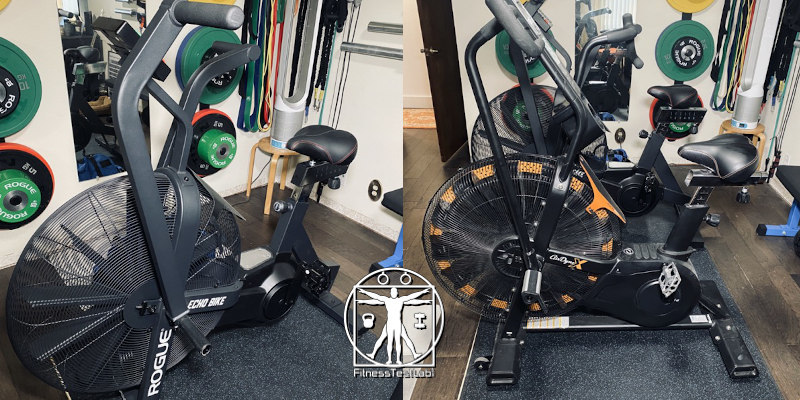 Two really solid bikes, but the Echo gets the nod

Depending on the time of year, you can usually buy a Rogue Echo Bike for $200-$300 less than an Airdyne Pro, which makes the purchase a no-brainer unless you want the extra versatility the Airdyne offers.

You can save a little money on an Airdyne by skipping the Pro in favor of an AD7. The AD7 is the same bike with a different warranty, but it is still more expensive than a Rogue Echo Bike.

The Schwinn Airdyne Pro and the Rogue Echo Bike are two of the most popular fan bike models available. Both bikes are extremely solid, but there are differences between them that are worth knowing if you’re considering a purchase of one of these bikes.

If you have any questions that I didn’t cover, feel free to drop me a line in the comments section and I’ll do my best to answer you.