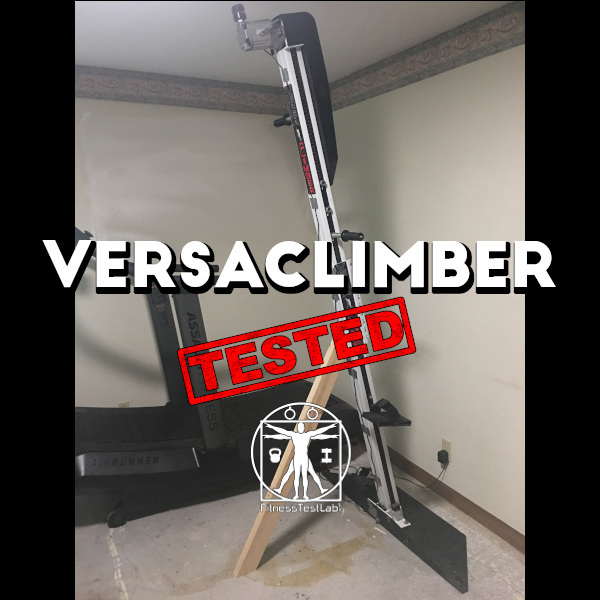 The VersaClimber is a climbing machine that targets all the major muscle groups. I’ve owned and used one for about a year, so I know first-hand how well it works.

If you’re looking for a way to burn calories in a low impact yet highly effective way, the VersaClimber is a great choice.

Should you buy a VersaClimber?

In case you just want the short answer here it is – the VersaClimber is a great machine but it does have a couple of drawbacks.

First, the basic H/HP models don’t offer variable resistance. Considering the asking price, I think this feature should be standard on every model.

Second, the display console is in serious need of a redesign to make it more readable.

Despite these issues, the VersaClimber does provide a killer workout that burns a significant amount of calories. I highly recommend it.

The VersaClimber also extremely well built, so your investment may possibly outlast your will to use it 😀 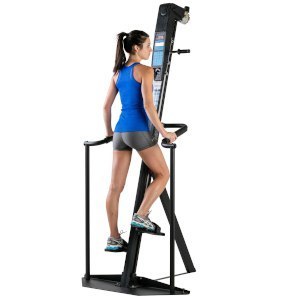 What is a VersaClimber?

The VersaClimber is a machine designed to mimic the experience of climbing.

To use it, you stand upright on two pedals while holding a pair of handles.

The VersaClimber is not motorized, so you have to push the pedals with your feet while pulling the handles with your hands in order to move.

It’s very easy to do. The machine only moves as fast as you do, so you climb at your own pace.

How does a VersaClimber work?

The VersaClimber mimics the experience of climbing through the use of pedals and handles that move up and down.

A VersaClimber can be purchased in one of two climbing pattern configurations, either standard or contra-lateral.

In a standard climb pattern, the elbows and knees on each side of the body go up or down together.

In a contra-lateral climb pattern, the elbows and knees on opposite sides of the body go up or down together, mimicking the crawling pattern of an infant.

This is why the contra-lateral pattern is also called the ‘cross-crawl’ pattern. 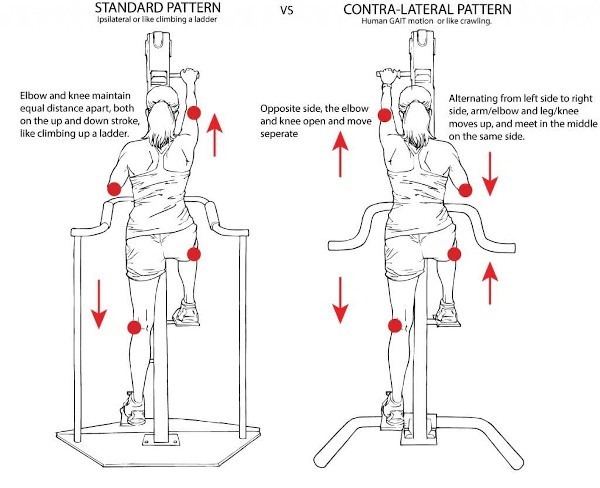 The contra-lateral or cross-crawl pattern is generally considered by physiotherapists to be better than the standard pattern because it’s closer to how humans naturally move while crawling, walking, and running.

The VersaClimber might be the only climbing machine that supports a cross-crawl climbing pattern. Others may exist, but if they do I couldn’t find them when I was researching the purchase of a climbing machine.

Benefits of the VersaClimber

I first became interested in a climbing machine after spending a few days working on a home improvement project that required me to go up and down a ladder multiple times a day.

For as much as I exercise, I was surprised at how sore this simple movement left me over the next few days. A light bulb went off in my head and I decided to incorporate climbing into my workouts.

So what are the benefits of a VersaClimber?

The VersaClimber is designed to mimic the experience of climbing, which makes use of all the major muscles in the arms, legs, and back.

Climbers are constantly having to push, pull, and use their core stabilizers to hold themselves up while climbing.

I can say from experience that using the VersaClimber does indeed require me to push, pull, and use my core to stabilize myself. It’s quite a workout!

Plus, the engagement of nearly my entire body means I get a full workout in a minimal amount of time. Ten minutes on the VersaClimber is enough for me to break a sweat and come away feeling energized.

Twenty minutes on the VersaClimber leaves me drenched in sweat and questioning my life choices. It’s intense!

Using the VersaClimber  does not pound the knees and joints like running does, and there’s no constant flexing of the spine like there is with rowing.

The VersaClimber is ideal for anyone who wants to avoid high impact exercises due to age, injury, or just preference.

The cross-crawl pattern of the VersaClimber aligns well with the way humans naturally move while crawling, walking, or running.

Climbing in a cross crawl pattern requires the constant transfer of force across the body from right to left and top to bottom, which helps improve overall physical coordination and balance.

Plus, the slight rotation in the torso helps create power and strength in the stabilizer muscles of the core.

For people like myself that spend a large portion of the day sitting down while working, this is a big deal. Better movement means a better quality of life and more resistance to injury.

Does the VersaClimber burn a lot of calories? Why yes, as a mater of fact it does.

My typical VersaClimber workout consists of a 1,000 foot climb, which I do as a warmup before lifting weights.

Climbing 1,000 feet takes me about 10 minutes, and in that 10 minutes I usually burn around 150 calories as measured using a Polar heart rate monitor. 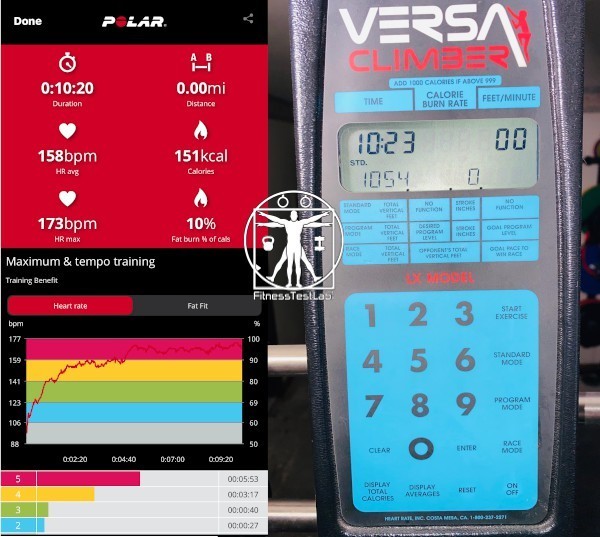 To put those 150 calories in perspective, the general rule of thumb is that the average person burns 100 calories per mile while running.

So in ten minutes, I burned 50% more calories than I would have by running a mile.

I should note that this number of calories was burned with the resistance on my LX set all the way to zero to set a baseline for the VersaClimber.

Increasing the resistance would obviously also increase the calorie burn, although increased resistance isn’t an option on the H/HP models.

The VersaClimber doesn’t require any special training to use. Just get on and start climbing.

Running properly and efficiently is a skill that usually needs to be developed over time, and rowing requires a significant amount of flexibility and good posture.

On the other hand, everyone knows how to climb. Someone new to climbing as a form of exercise can start out slow with the VersaClimber and work up at their own pace.

The VersaClimber is built like a tank. I bought mine used, and I was told that the unit I bought came out of a gym that went bankrupt.

So, my unit is several years old at the very least, was used in a commercial setting, and still works flawlessly. I’m super impressed with how well the VersaClimber is constructed.

Here’s everything you need to know about the VersaClimber : 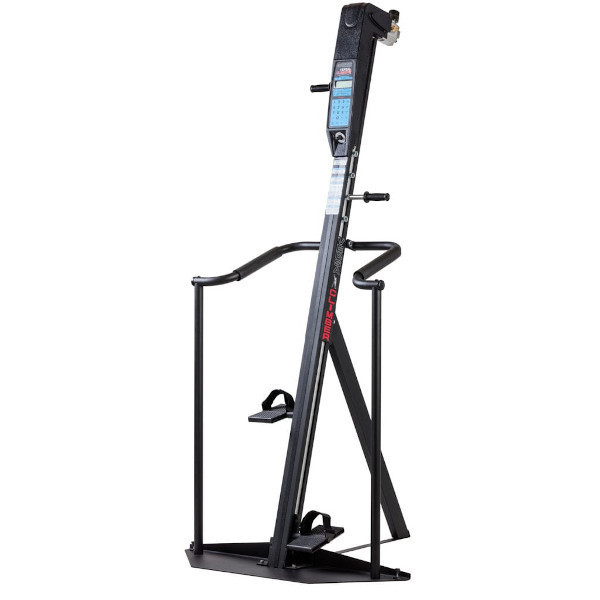 I use the VersaClimber 2-4 times a week for 10-20 minutes at a stretch, although I usually stick to 10 minutes as a warm up before moving to weight training.

I cycle between these three strides every minute for 10-20 minutes and I find the variation keeps me from getting tired or bored.

I also splurged on a pair of pistol-grip ‘running’ handles, which I much prefer over the regular handles that come standard with the VersaClimber. 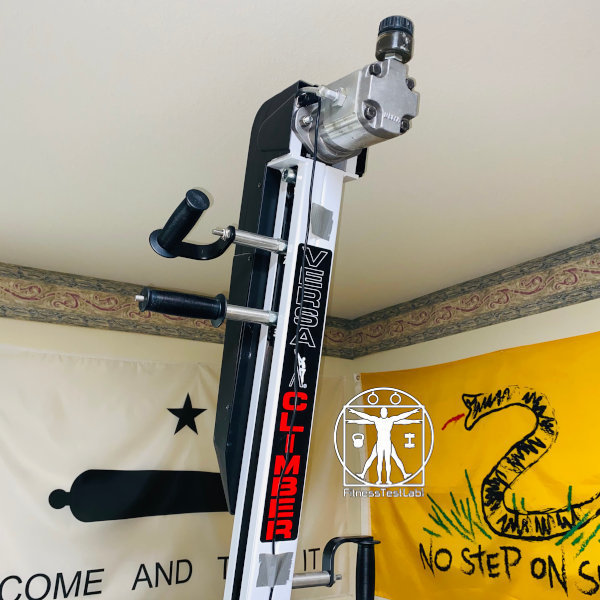 The beauty of the VersaClimber is that it incorporates all the major muscle groups — arms, chest, shoulders, back, butt, hips and legs – in a single workout.

I’ve already mentioned the various benefits of the VersaClimber, including the high calorie burn I get from a climbing workout.

My biggest gripe with the VersaClimber is the lack of variable resistance on the H/HP models, which happen to be the most affordable models and therefore the ones that most people will consider first.

For what it’s worth you can still make a lot of progress with one level of resistance, I just personally think that variable resistance should come standard considering the price tag. 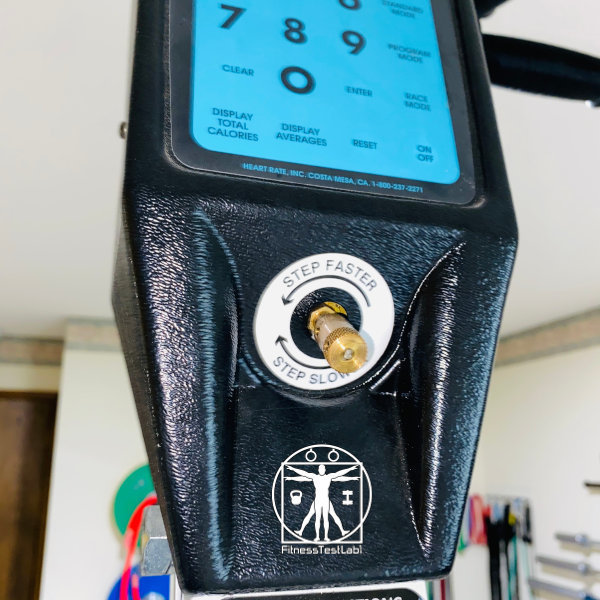 The console on the VersaClimber is my second biggest gripe with this machine.

It has the look and feel of an interface designed in the 80’s and never touched since. 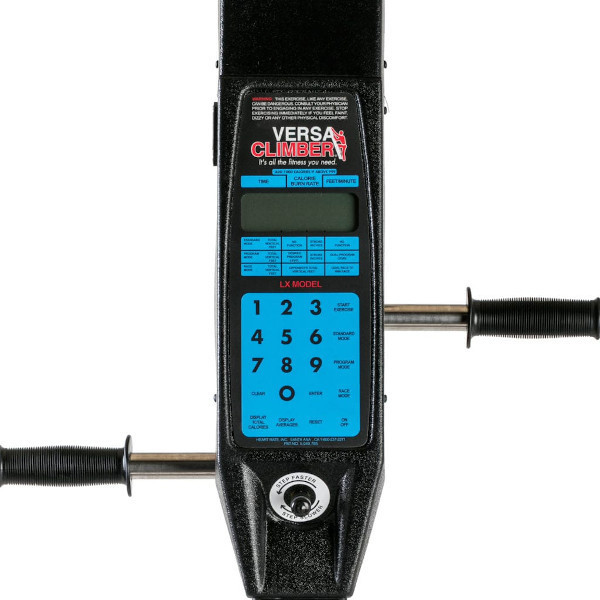 The console is big, but very little space is dedicated to the unlit screen. Instead, a large amount of console real estate is taken up by a number pad I’ve never had a reason to use.

This makes the information I most want to know – like how high and how long I’ve been climbing – difficult to read at a glance during an actual climbing session.

For comparison, I also own an Assault Fitness Air Runner (read my full review), which has a great console that is easy to read at a glance while using the machine.

It would be great if the VersaClimber screen was bigger, with larger numbers for easier reading.

When I started researching climbing machines I first looked at the Maxi Climber.

The Maxi Climber is a LOT more affordable than a VersaClimber, but I eventually decided against it.

Even though I would have saved a lot of money, my motto is ‘buy nice or buy twice’. I read far too many reviews from Maxi Climber owners who had their machines break after only a few weeks of moderate use.

Plus, the Maxi Climber doesn’t offer a cross-crawl climbing pattern. If I was going to do this I wanted to do it right.

DIY engineering at its finest! 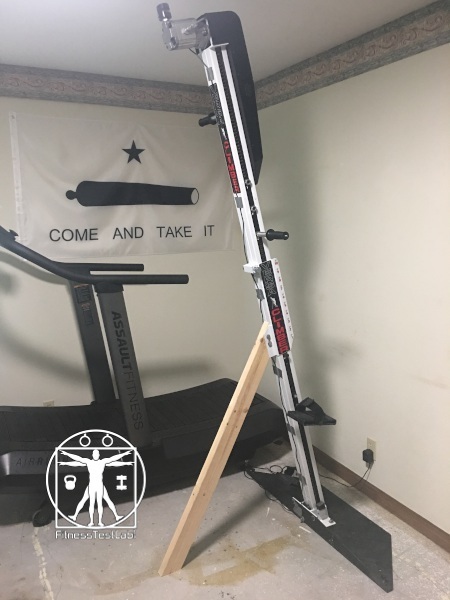 I chose not to install the cross bars that came with the VersaClimber because they take up extra space and I’m already short on space in the Fitness Test Lab.

The cross bars allow the VersaClimber to be used as a stepper as well as a climber, but I didn’t buy the machine to use as a stepper so no big loss to me.

It might seem odd to compare a VersaClimber to an Air Runner (read my full review) because they are entirely different machines.

But, I own both so why not? Someone out there might find this comparison useful.

So let’s compare an apple to an orange.

The Air Runner takes some getting used to, which I discuss in my full Air Runner review. Plus, running with proper form is a skill that requires development.

On the other hand, the VersaClimber is very simple to use and requires no special training or skill development.

The VersaClimber takes up 4’x4′ and the Air Runner takes up roughly 3’x5′. There’s not a clear winner here, both machines take up a significant amount of floor space.

This one’s a no brainer if you have joint issues. Running on the Air Runner is very nice, but still higher impact than the zero impact VersaClimber.

I could probably think up other comparison criteria, but these are the main ones I think most people would care about.

The VersaClimber is easier to use than the Air Runner (if you aren’t already a runner) and is lower impact, so it’s a great option for anyone from novices just starting out to elite athletes looking for an edge.

The VersaClimber is a great all body workout, no question about it. The machine works well and is solidly built.

It’s also a low impact workout that improves overall mobility by harnessing and reinforcing one of the most basic human movement patterns.

And last but not least, using the machine burns a lot of calories due to the engagement of all major muscle groups.

The base H/HP models don’t include variable resistance and the display console is in need of an update for the 21st century, but the benefits of the machine far outweigh these issues.

The VersaClimber gets an enthusiastic thumbs up!

Do you have any questions about the VersaClimber? Sound off in the comments below!